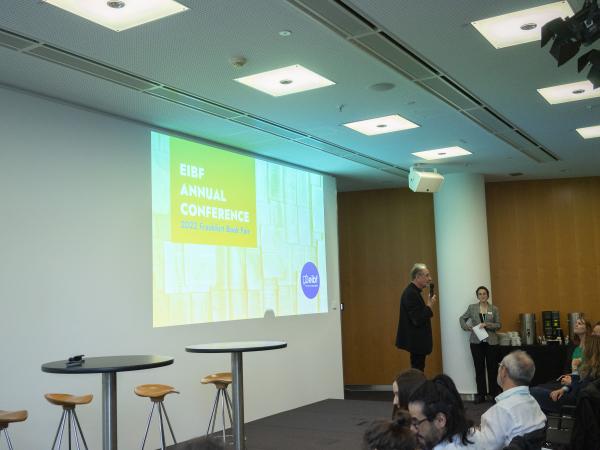 EIBF at the 2022 Frankfurt Book Fair

Were you unable to attend this year’s Frankfurt Book Fair? Fear not! Let EIBF take you through all the highlights, best moments and main events from this year’s edition, so you won’t miss a thing. Keep reading!

The entire EIBF team joined the Opening Ceremony of the 2022 Frankfurt Book Fair to celebrate its inauguration and to welcome this year’s Guest of Honour: Spain. 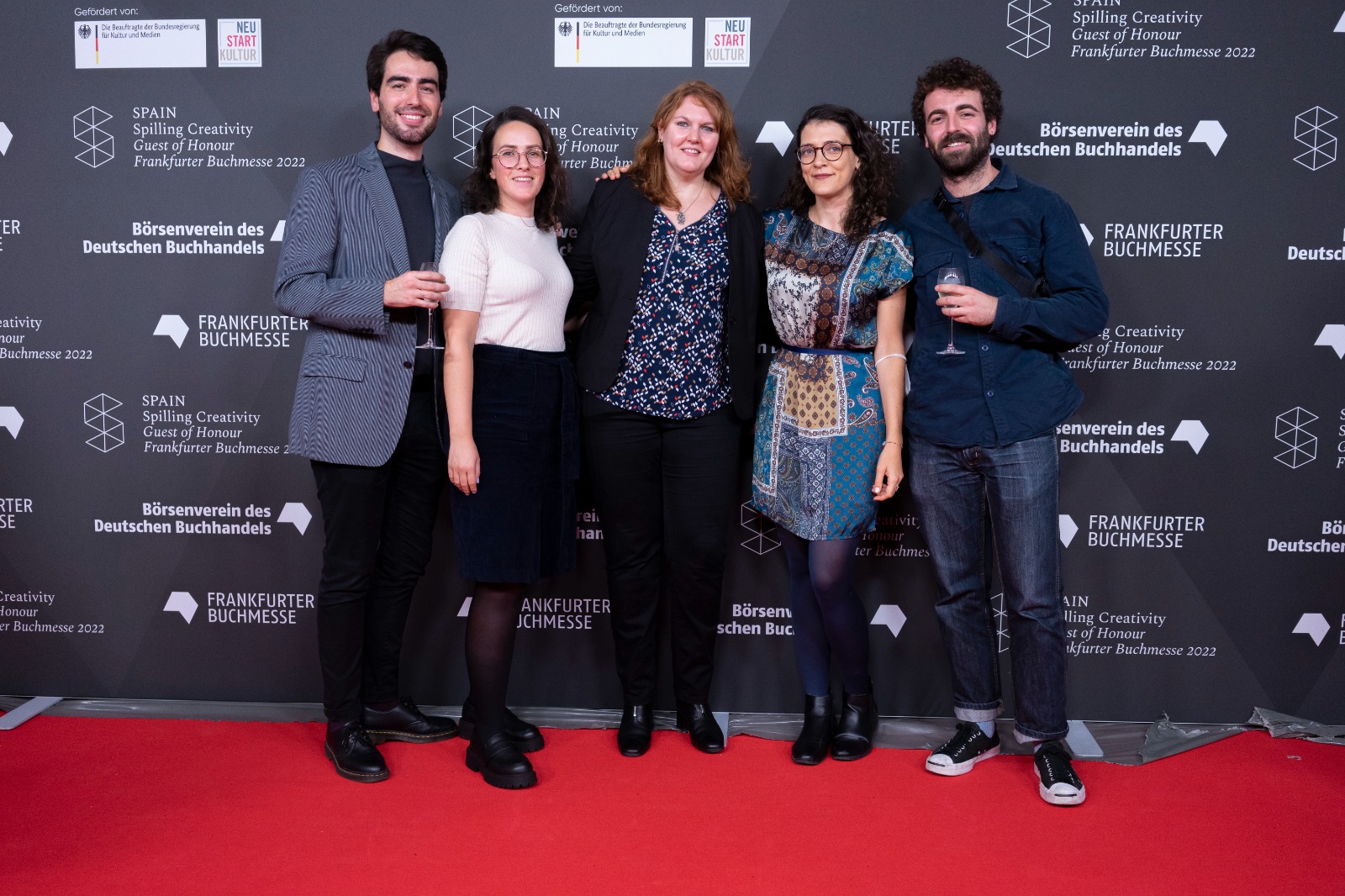 A rare picture of the EIBF Secretariat all dressed up

Inside the packed auditorium, we were joined by King Felipe VI and Queen Letizia from Spain, as well high-profile figures and politicians, such as the President of Germany, Mr Frank-Walter Steinmeier, and the Minister-President of Hesse, Mr Boris Rhein.

Both King Felipe VI and President Steinmeier emphasized that the essence of books has remained unchanged over the years, despite the fast-changing and increasingly digitalised world. The entire book chain, from authors and translators to publishers and booksellers, play a key role in ensuring this love for books remains alive. Without them, access to culture would not be possible.

Spanish authors Antonio Muñoz Molina and Irene Vallejo also took to the stage, taking us through Spain’s rich literary history and each highlighting two important aspects of this year’s fair: diversity of authors and stories, and the value of translation.

And with a bang, the 2022 Frankfurt Book Fair was officially open! 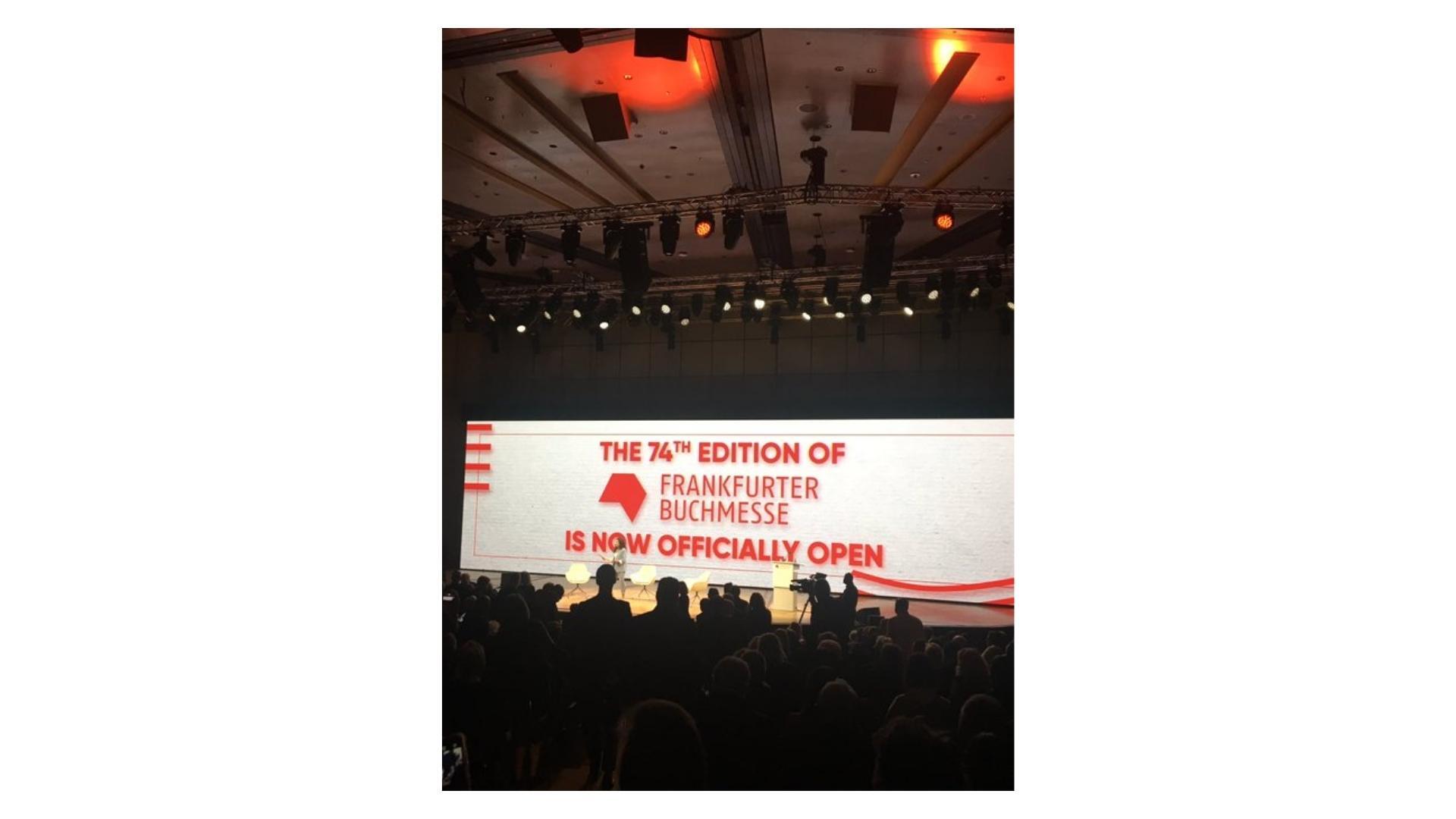 We kicked off our first day at the Fair attending an event from our colleagues at the Federation of European Publishers (FEP), where they presented statistics and data of the book market for 2021. 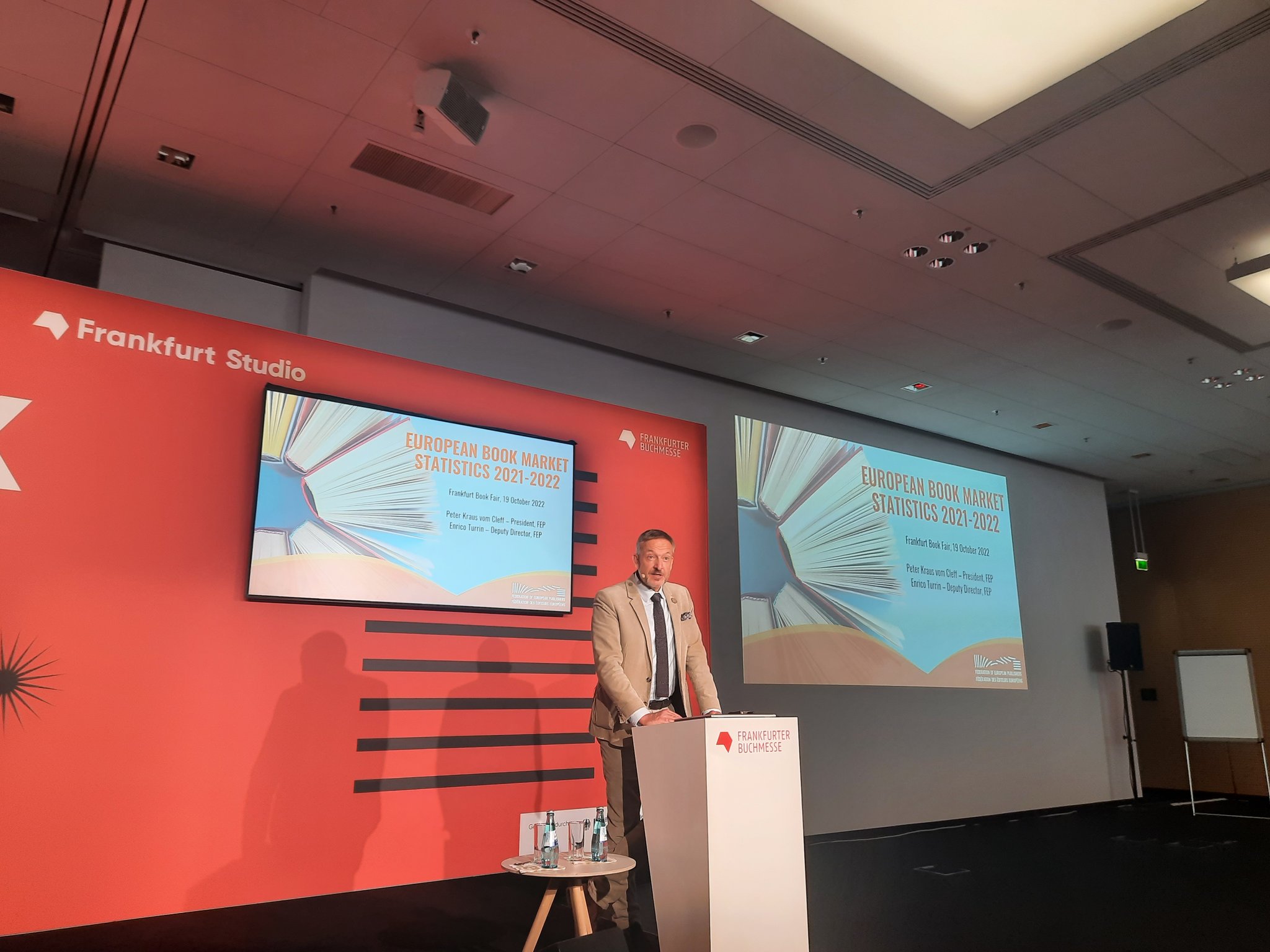 Peter Krauss vom Cleff, FEP President, and Enrico Turin, FEP Deputy Director and Economist, announced that book sales experienced an overall growth of 6.5% in sales in 2021, with the highest growth rate seen in Portugal and the Netherlands. Out of all book formats, printed books remained the most popular, with children's books showing particular resilience.

At the same time, online sales grew especially in Sweden, the Netherlands, Austria and Italy.

We continued our day meeting with several members, as well as prospective members and ongoing partners. 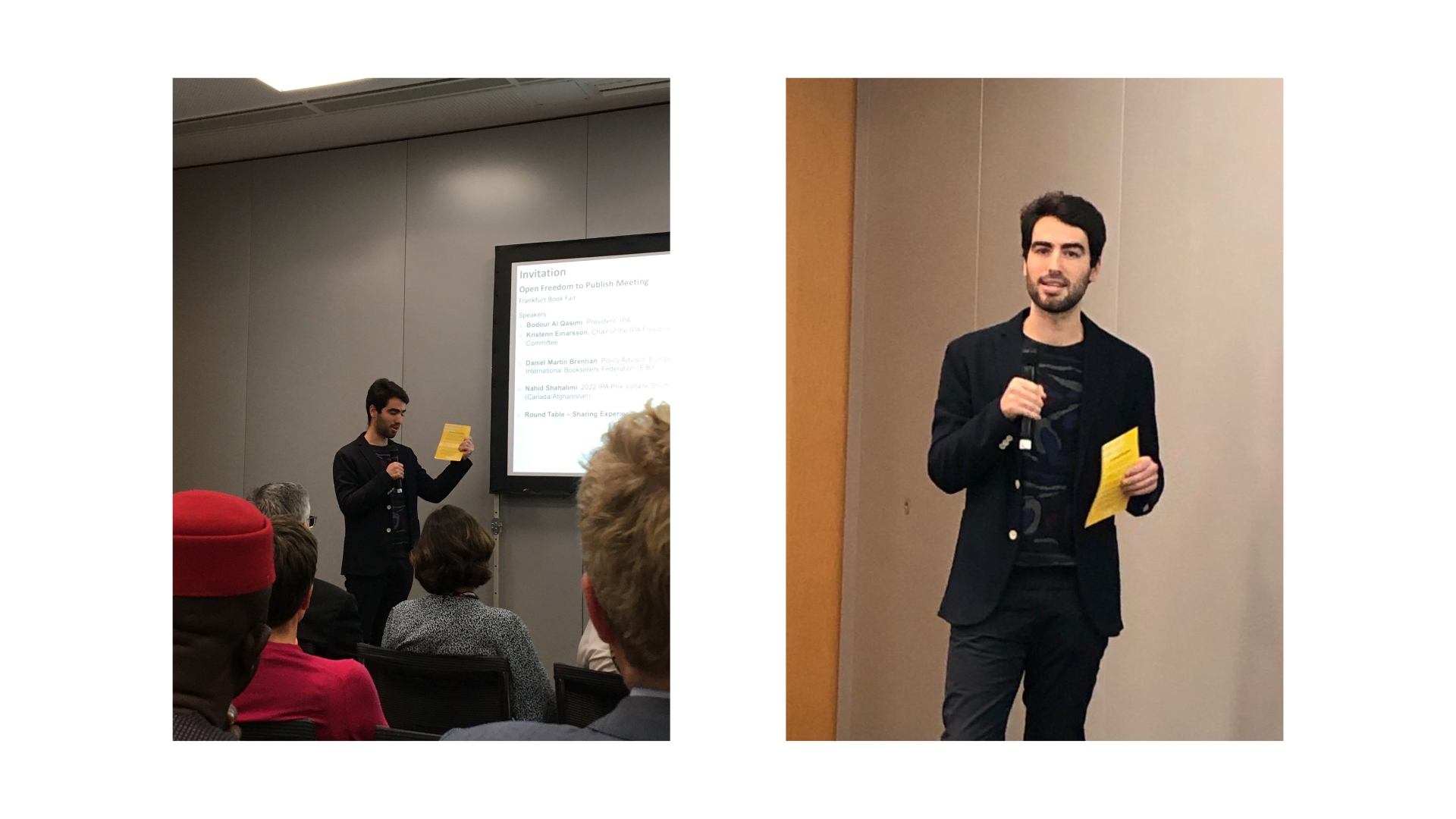 Our first day ended with a long-overdue dinner with EIBF members, ahead of Thursday’s Annual Conference. It was lovely to reconnect with members from all over the world after a few years of (mostly) virtual gatherings. Here are a few pictures of the memorable evening: 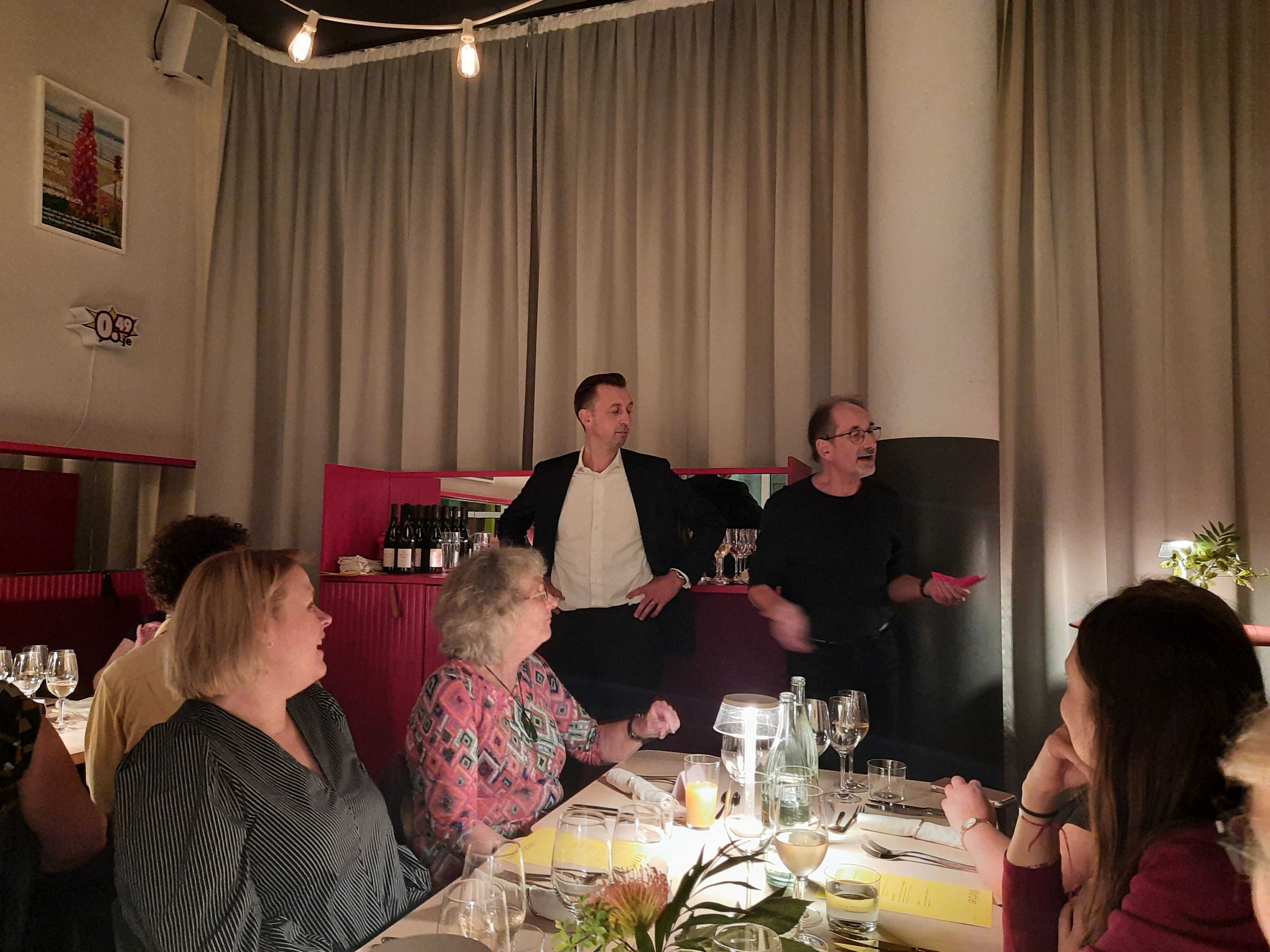 Our Co-Presidents welcoming the attendees

Day 2: EIBF Annual Conference is back!

It was an absolute joy to finally be able to gather our members, industry representatives, and booksellers from across Europe and beyond for our annual conference at the Frankfurt Book Fair once again.

The 2022 Annual Conference was kicked off by Spanish bookseller Enrique Pascual Pons, who took us on a journey through the concept of hybrid bookselling. 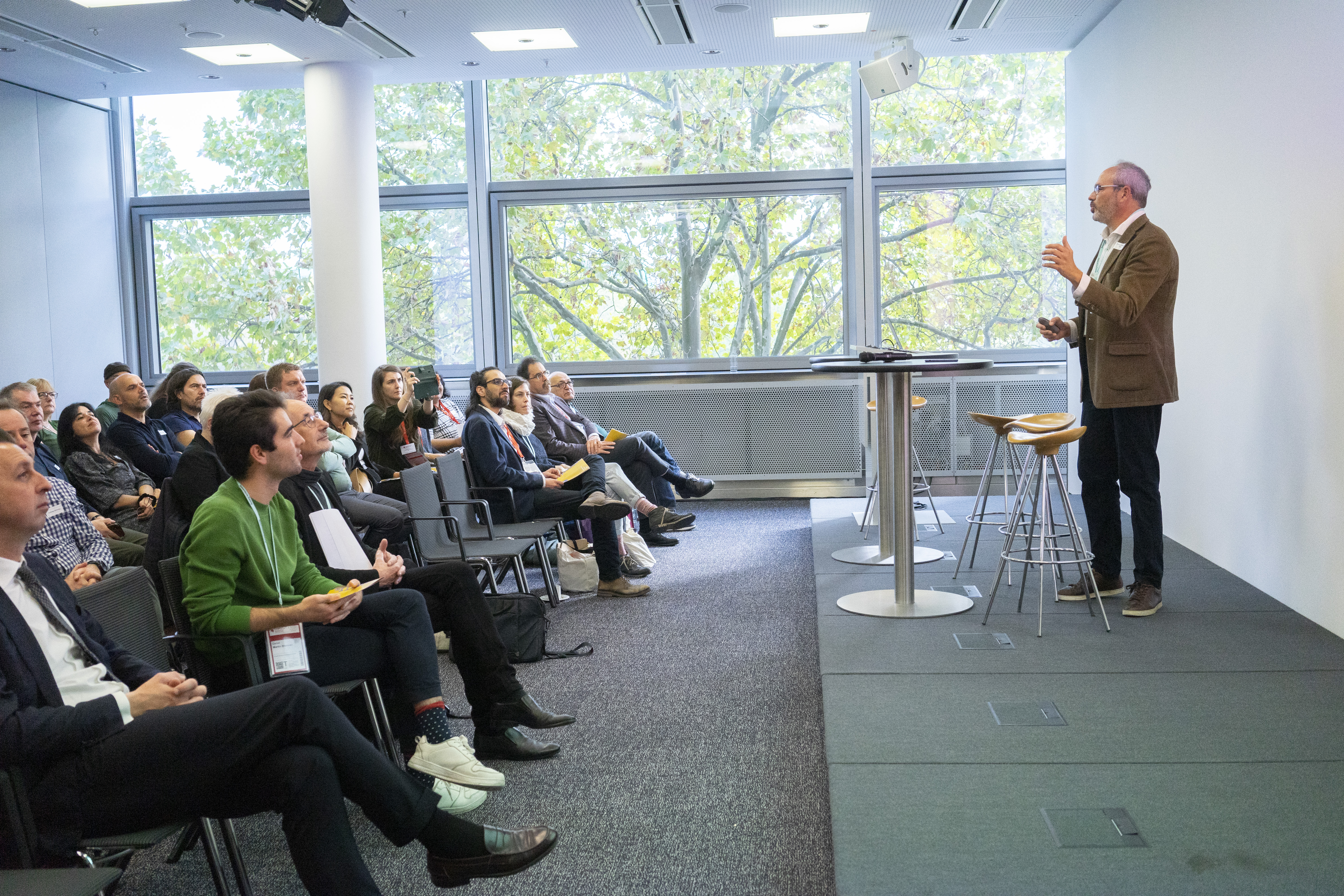 We then listened attentively to Katerina Malakate, Aidai Maksatbekova, and Joao Varella, booksellers from Greece, Kyrgyzstan, and Brasil, discuss the thrills, hardships and lessons learned from bookselling in their respective countries. We learned that we have so much in common despite the national borders separating us. The multicultural panel was moderated by Hazel Broadfoot, bookseller herself and President of the UK & Ireland Booksellers Association. 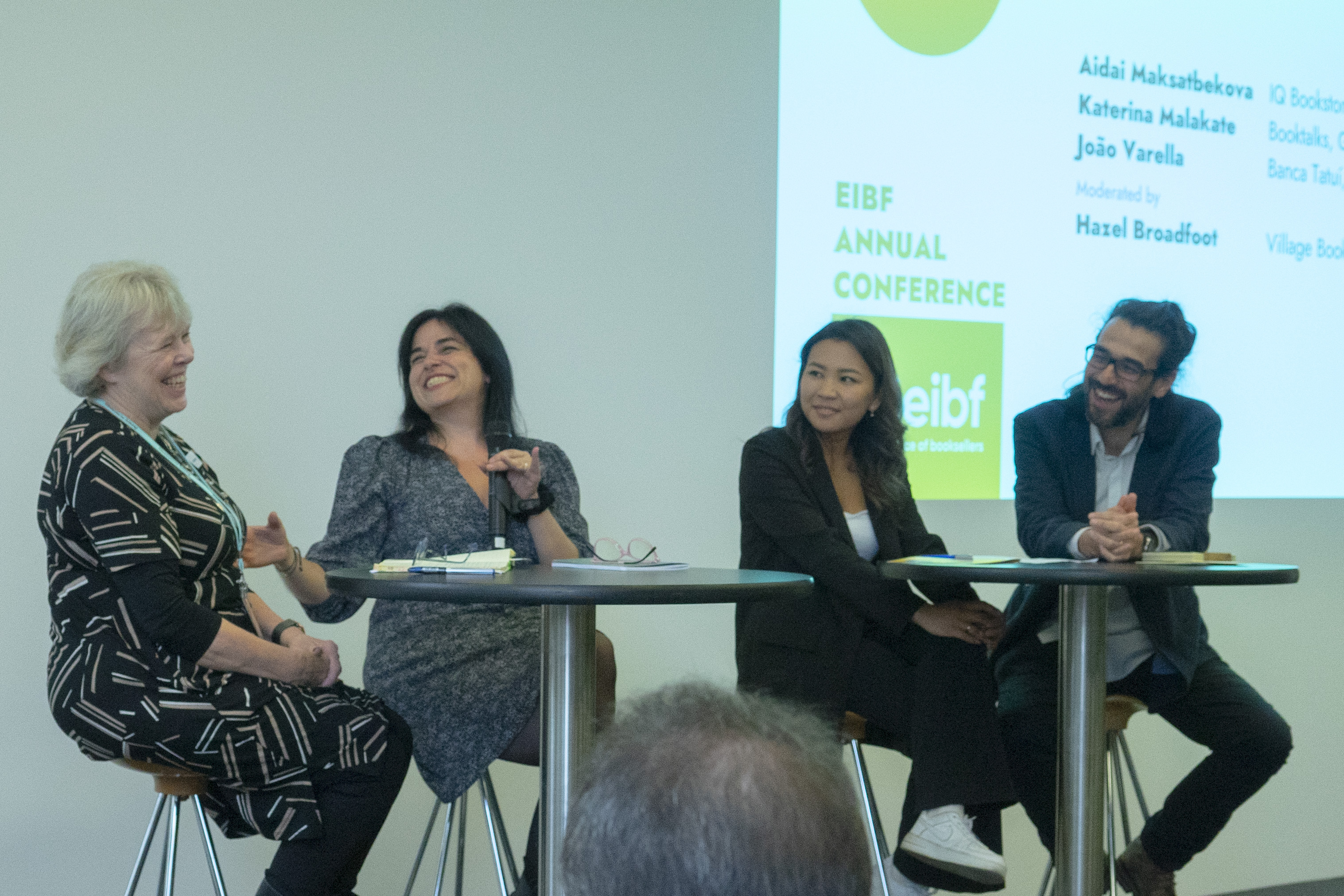 Presently, Jeff Deutsch, Director of Seminary Co-op Bookstore in Chicago and author of In Praise of Good Bookstores, took the stage together with Raluca Selejan, co-founder and co-owner of La Doua Bufnite Bookshop in Romania, who moderated the discussion having previously reviewed his book. You can find her full review here. 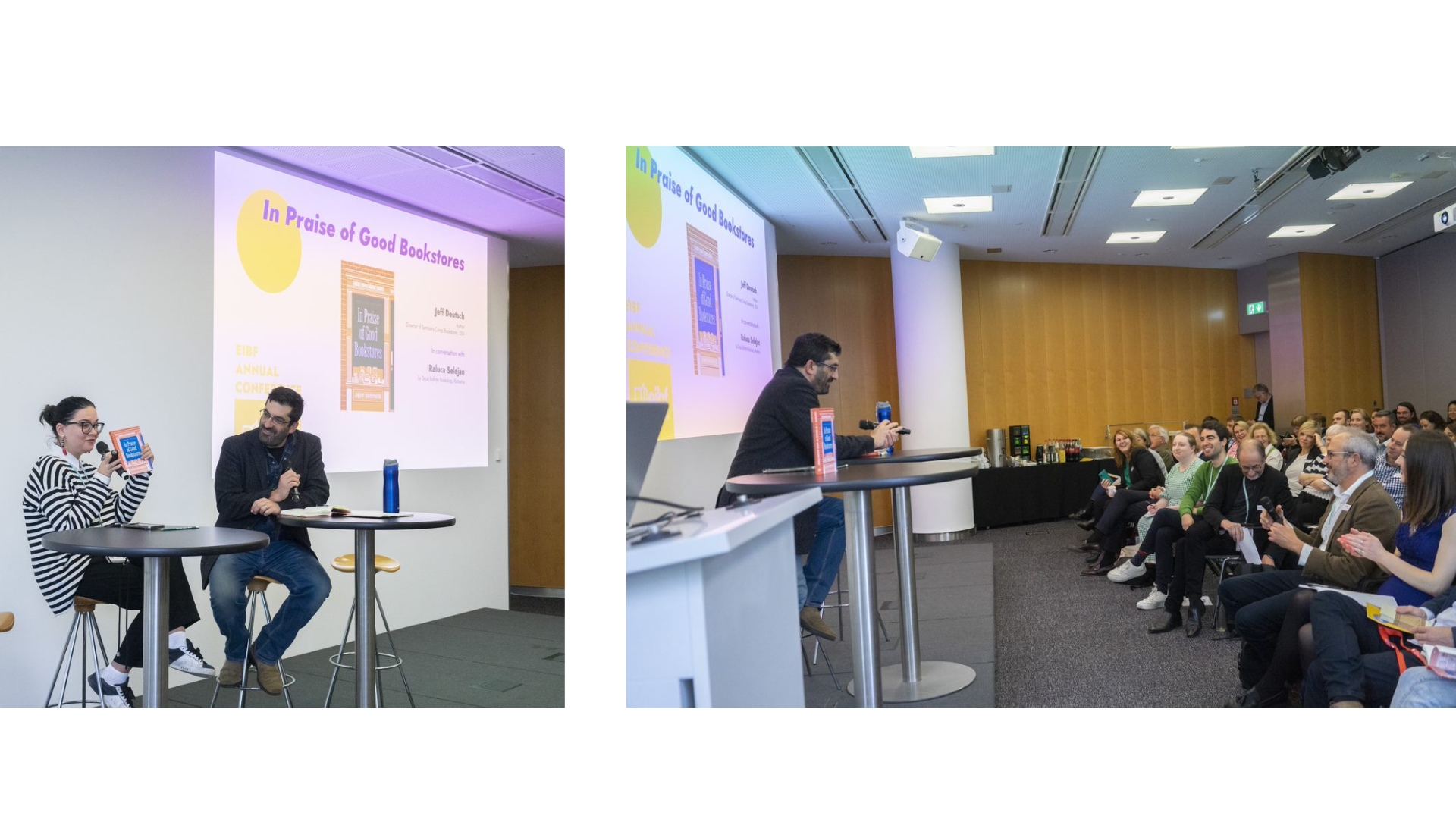 Just after the morning’s conference, we took the stairs one floor down to attend the Frankfurt Book Fair and FEP’s joint event with Ukranian President Volodomyr Zelensky’s address to the book sector.

In his speech, Zelensky asked the wider book community to write, publish and distribute books to share knowledge, “because giving knowledge to people is the answer.” 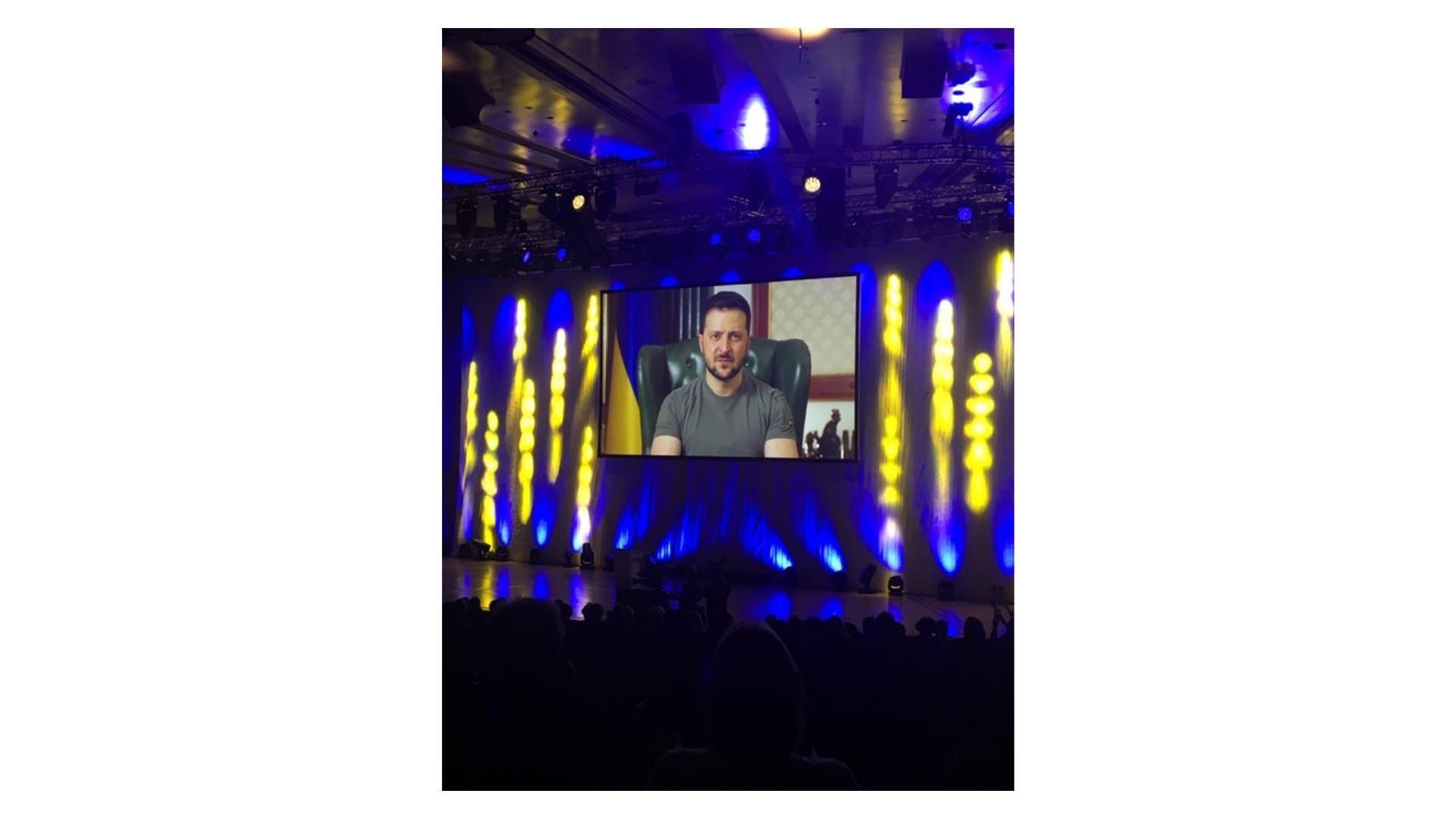 Next up was the EIBF’s General Assembly where we presented an overview of EIBF’s policy and communications activities over the past year. The GA was also the moment where EIBF’s new charter on Freedom of Expression was unveiled to members.

As the fundamental right to freedom of expression is a topic close to many booksellers’ hearts and part of the everyday reality of the book world, the EIBF board and Secretariat wished for some time to develop a document that would help steer EIBF's work and ensure a more proactive response where ncessary.

Therefore, over the summer, EIBF’s Policy Team, Daniel Martín Brennan and Tora Åsling, together with a committee of dedicated members, produced a charter on Freedom of Expression, which is to guide the association's work in the future. Members were invited to sign the charter at the General Assembly as a gesture of support. 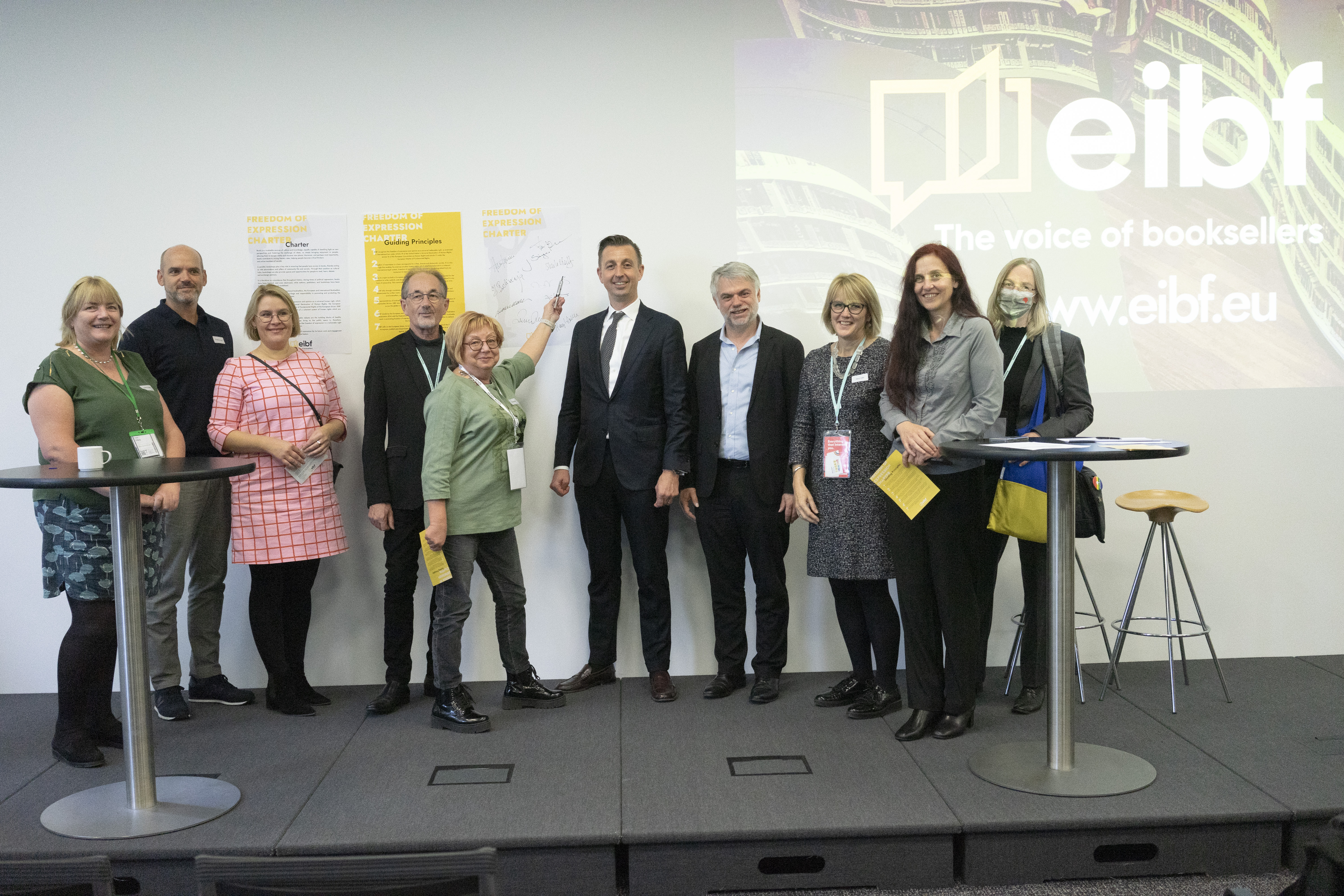 The rest of the day the Secretariat spent the way you do most in Frankfurt: attending meetings and events with members and other relevant sector representatives.

One of the last points on our Frankfurt agenda was the European Union Prize for Literature (EUPL) event. On stage in the Pavilion were EUPL winner Iva Pezuashvili from Georgia and special mentions Jacobo Bergareche from Spain and Gaea Schoeters from Belgium. The three remaining special mentions who couldn’t be with us in person, Sladjana Nina Perkovic from Bosnia and Herzegovina, Eugenia Kuznetsova from Ukraine, and Tadhg Mac Dhonnagáin from Ireland, had all sent video messages. The event was moderated by FEP Director Anne Bergman. 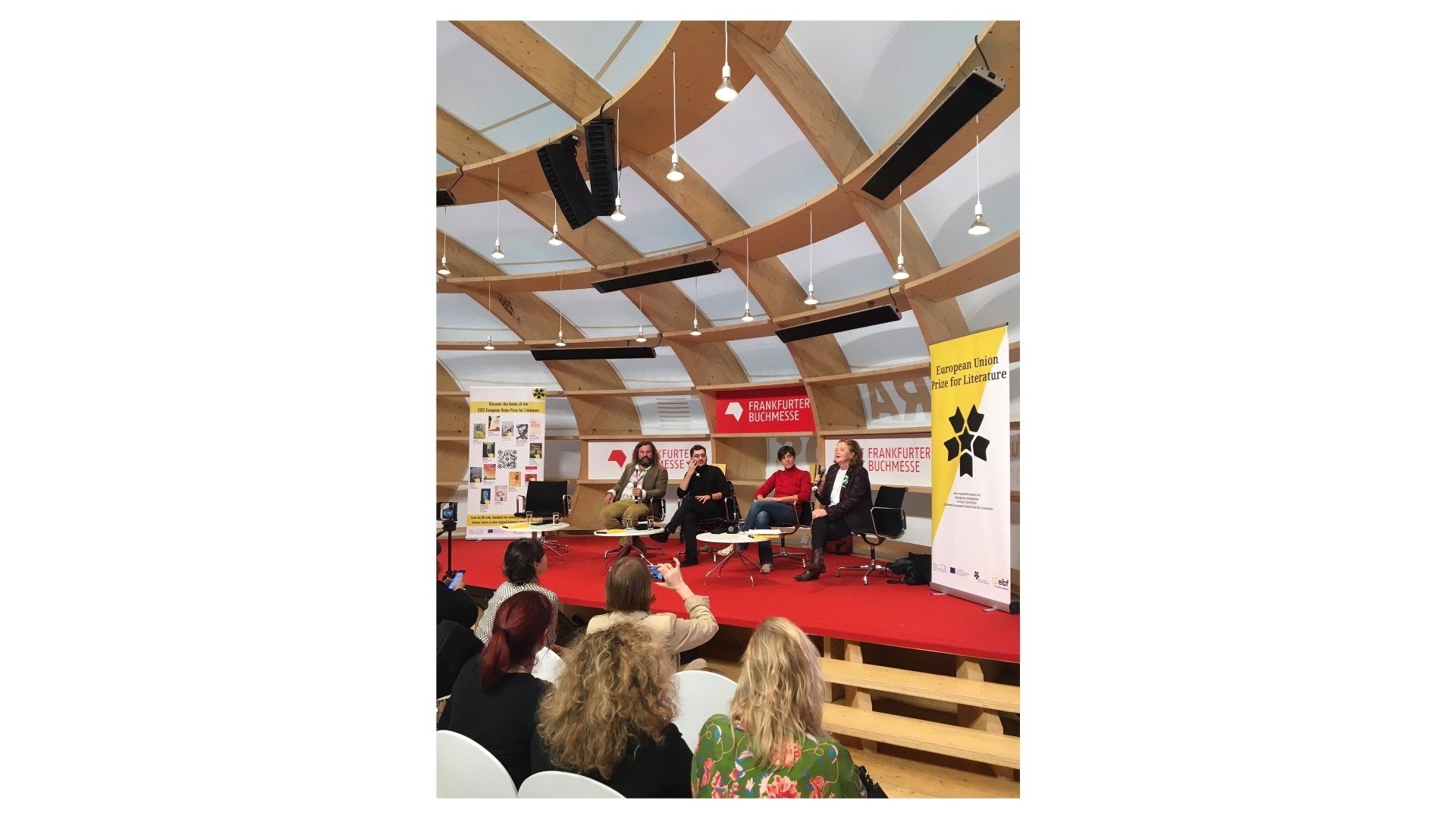 And that's all for this year's Frankfurt adventures! Back in Brussels, reminiscing about the eventful Frankfurt days, the EIBF team all agree on one thing: we are so happy we finally had the chance to meet our members in person again and cannot wait for next year!