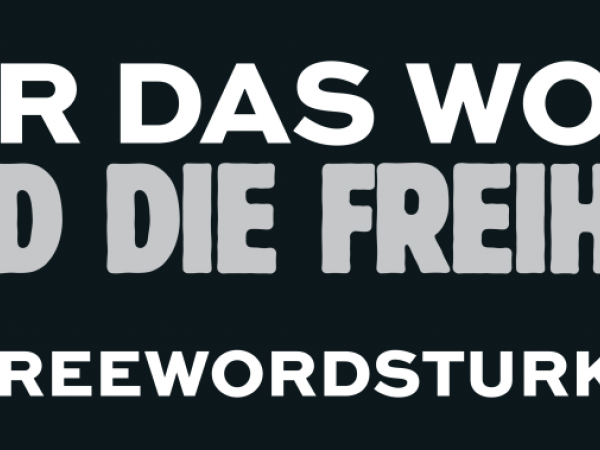 Frankfurt am Main / Berlin / Darmstadt, 29 August 2016 – The Turkish government is currently waging an aggressive campaign against freedom of expression. Since the attempted coup in that country six weeks ago, journalists, editors, publishers and other media and culture-industry professionals critical of the government have been subject to widespread harassment and persecution. At least 60 journalists and authors have been arrested and more than 130 media companies have been shut down, including 45 newspapers, 29 book publishers and 15 magazines. These actions have further exacerbated the already tense situation for journalists, authors and publishers in Turkey.

As a result, the German Publishers and Booksellers Association (Börsenverein) has joined with the PEN Centre Germany and Reporters without Borders to launch a campaign titled “Für das Wort und die Freiheit #FreeWordsTurkey”. Together these bodies are calling on the public to sign an online petition addressed to the German government and the EU Commission. The petition implores Chancellor Angela Merkel and EU Commission President Jean-Claude Juncker to take an active and uncompromising stand in favour of freedom of expression, freedom of information and freedom of the press in the context of any decisions, actions and statements they make moving forward. It calls on them to make it clear that these freedoms are in no way subject to negotiation. The three organisations additionally urge politicians and decision makers to re-evaluate their policies with regard to Turkey and other countries in which freedom of expression is being severely restricted. They also demand that swift and non-bureaucratic support be provided to persecuted journalists and authors, for example by means of emergency visas.

Alexander Skipis, Managing Director of the Börsenverein: “The Turkish government has unleashed a massive attack on freedom of expression. The German government and the EU Commission simply cannot be silent on this subject any longer. Freedom of expression is a fundamental human right and, as such, is non-negotiable. Politicians and governments have an obligation to confirm their uncompromising commitment to this basic right. We cannot allow freedom of expression to be undermined or instrumentalised for reasons of political expediency. We need to work together to break this silence and send out a clear signal of support for freedom of expression”.

Sascha Feuchert, Vice President and Writers-in-Prison Officer at PEN Centre Germany: “The arrests, intimidation and restrictions imposed on authors in Turkey must stop immediately. We have the right and responsibility to fight on behalf of our colleagues. The targeted measures currently underway against freedom of the press and freedom of expression mean that democracy is under threat not only in Turkey; the inaction of European political forces in the face of these events significantly jeopardises our own democratic values as well. We simply cannot stand by and accept this”.

Michael Rediske, Management Spokesman for Reporters without Borders: “It is simply not an option for us to remain silent in the face of what is happening in Turkey today. Our obligation now is to take a clear stand against the massive persecution of journalists and authors there. Turkish media professionals who are being persecuted need our solidarity and practical support”.

Joint movement of the book and media industry
Publishers, bookstores and other media-related companies are encouraged to join in actively supporting the campaign, for example by featuring images of the “Für das Wort und die Freiheit #FreeWordsTurkey” message on their websites. Bookshops can draw attention to the petition via posters in their stores motivating customers to participate in the coming days. The three organisers are also calling on partner organisations in Germany and abroad to join the campaign and circulate the petition.

About the Börsenverein des Deutschen Buchhandels:
The Börsenverein des Deutschen Buchhandels (German Publishers and Booksellers Association) represents the interests of the German book industry in the political and public arenas. It was founded in 1825 and its current members include roughly 5,000 booksellers, publishers, wholesalers and other media companies. It runs the Frankfurt Book Fair and awards the annual Peace Prize of the German Book Trade and the German Book Prize. It also encourages reading and defends the right to freedom of expression and the freedom to publish.

About the PEN Centre Germany:
The PEN Centre Germany is one of over 140 writers associations belonging to PEN International. Its three letters stand for the words poets, essayists and novelists. PEN was founded in 1921 in England as a literary circle of friends and quickly spread out to other countries across the globe, establishing itself as an advocate for freedom of expression worldwide. Today it is considered to be the voice of persecuted and suppressed writers everywhere.

About Reporters without Borders:
Reporter without Borders (ROB) researches and monitors violations against freedom of expression and freedom of the press worldwide. It alerts the public when journalists and their colleagues are in danger and/or suffering persecution. The organisation works to gain more safety and better security for journalists. It fights both online and offline against censorship, against the use and export of censorship software and against restrictive media laws. The RWB Emergency Commission also supports persecuted journalists and their families, for example, by replacing destroyed or confiscated equipment and by paying fees for lawyers and doctors. When an individual’s life in is danger in their home country, RWB helps them migrate to a secure country. The German branch of Reporters without Borders has been active since 1994 and is part of Reporters sans frontiers, a Paris-based organisation founded in 1985 with a worldwide network of correspondents.