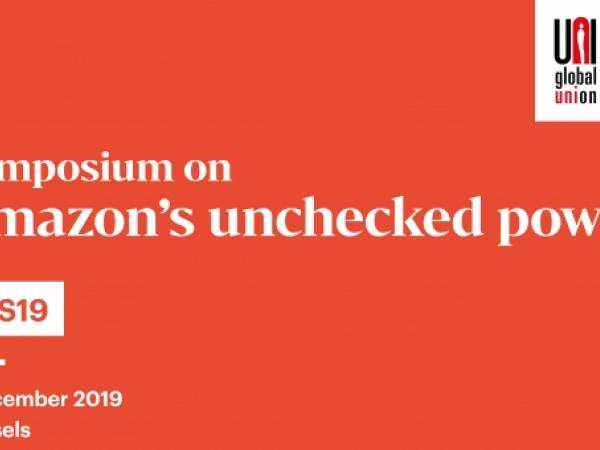 At the full-day symposium, a series of panels laid bare the grave consequences of Amazon’s business model and practices for the economies and societies where it is active, particularly by engaging in systematic tax avoidance, compounding the climate crisis and undermining labour rights as well as privacy and digital rights.

During a panel centred around the topic of “Amazon’s monopoly power: threats to a fair marketplace”, booksellers were represented by Meryl Halls, Managing Director of the Booksellers Association of the United Kingdom and Ireland (BA) and EIBF Executive Committee member. Halls summarised the event as follows:

“It was inspiring and energising to take part in the Amazon Symposium in Brussels on 2nd December, with EIBF Director, Julie Belgrado.  We gathered with global group of those interested in the ‘unchecked power of Amazon’, from unions keen to re-establish workers’ rights, to competition specialists, from social justice campaigners to climate justice activists, and we were very proud to represent bookselling in this group.  We outlined the impact of Amazon on bookselling in the UK and across Europe and we were resolute in laying out the colossal impact Amazon has had on the bookselling sector, with its unfair competitive advantages in many tax jurisdictions, its widescale tax avoidance activities and its monopolistic and anti-competitive behaviour – at the same time as flying the flag for the incredible work booksellers across the world are doing to counter the impact of Amazon.  We need concrete global action to alleviate the impact of the monopolistic behaviour and look forward to working with partners to make this happen, in the UK and in the European Union.”

The timing of this event is critical, coinciding with the first formal day in office for the recently confirmed European Commission under President Ursula von der Leyen. EIBF will constructively engage with the EU institutions to ensure that fair competition ranks highly on the EU agenda, and lend its full support to policy responses which seek to put a check on Amazon’s monopolistic behaviour in Europe and further afield.

About EIBF: The European and International Booksellers Federation represents national booksellers associations in the European Union and beyond. EIBF Members in turn have in membership booksellers of all kinds: brick and mortar bookshops, online bookshops, independents, chains.