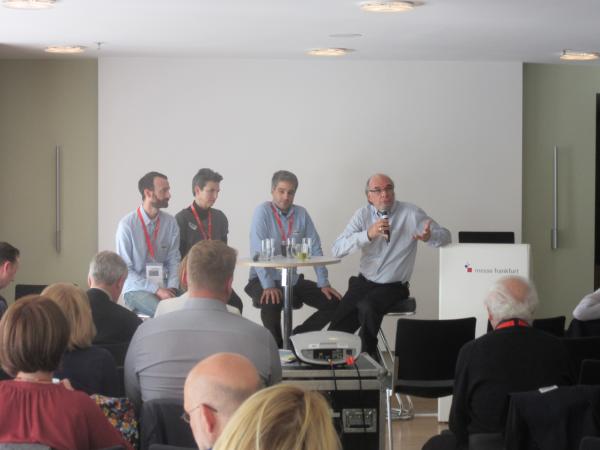 After two years away from the fair grounds, EIBF is thrilled to invite you to a half day of exchanges, discussions and meetings with colleagues

The European and International Booksellers Federation is pleased to once again provide you with a space for sharing knowledge and best practices with key stakeholders in the bookselling industry. We have prepared an exclusive programme dedicated to booksellers and booksellers associations, full of inspirational ideas to bring back home, and focused on the future. You can download the full programme here and get to know our speakers below.

The half day conference will be held on Thursday 20 October, at room Fantasie 1 (Congress centre, C3).
Please note that the entrance to the conference is free, but will only be granted upon registration. Please register here before 17 October.

Get to know the speakers

Enrique Pascual Pons has developed his entire professional career at Marcial Pons bookshop and publishers, where he has held different positions until he became the current Director of Bookstores and Counselor of the publishing houses of Law and History.

Jeff Deutsch is the director of Chicago’s Seminary Co-op Bookstores, which in 2019 he helped incorporate as the first not-for-profit bookstore whose mission is bookselling. He lives in Chicago.

João Varella is the founder of the Brazilian publishing house Lote 42 and the bookstores Sala Tatuí and Banca Tatuí. He organizes events on the Brazilian independent publishing circuit, such as Feira Miolo(s) and Printa-Feira. João has written six books, the most recent being "Videogame Pandemia", published by Elefante in 2021. João has been a journalist since 2007, and currently collaborates with the Folha de S.Paulo newspaper. He presents HBO's documentary "12 Moedas". João lives in São Paulo.

Katerina Malakate was born in Athens in 1978, is married and has two sons. She is the author of three novels, the latest being “Faceless” by Metaixmio in 2020. She is the Vice President of PEN Greece. She owns Booktalks, a small indie bookshop- café in Athens. There she hosts a lot of literary events, coordinates two book clubs, and two workshops (creative writing and reading). She is the creator and admin of one of the biggest facebook groups about literature in Greece (Diavazontas) and blogs in www.diavazontas.blogspot.gr